Often times when a print project has been completed, everything has been printed and the client has received teh final product there is one last act to be completed. The client usually wants a high-resolution PDF of the final files with the final copy and retouched images. Typically this is not a problem and is easily accomplished. But when you’re dealing with a document that has wrap-around covers and gate folds and photo-illustrations and graphics that span multiple pages, it’s not always as simple. The easiest way to handle these pages is to create a PDF with spread, and then just duplicate the spread and crop those duplicates until you have each of the individual pages split up.

But in Adobe Acrobat 9, just cropping the pages isn’t enough. Because Acrobat doesn’t actually crop the page, it just masks out the unwanted portions of the page, but they still remain in the document and can unexpectedly reappear at inopportune times. I can see how this was done with good intentions by Adobe, but that doesn’t change the fact that it’s a huge pain in my arse.

The document may appear cropped, but a quick peek at the Crop Pages dialog window tells a different story.

There are numerous suggestions on the web and on Adobe’s support website, but none of them seemed to work. The Document > Examine Document menu option seemed the most promising, but even that failed. And it actually created more problems when it removed some transparency masks that were already in the layout.

Then, finally I came across an an actual solution on the site Mac Production Artist. Only problem is, it requires Applescript. Crap. Eventually I resigned to the fact that I had no apparent alternatives so decided to keep calm and carry on. I did a quick search on my machine for AppleScript and found the AppleScript Utility. Except that’s not what I wanted. Next I found the Script Editor application. Bingo. I already had my faux-cropped document open, so made a duplicate of the PDF (just in case) and then I copied the lines of AppleScript from the site and pasted it into the Script Editor. 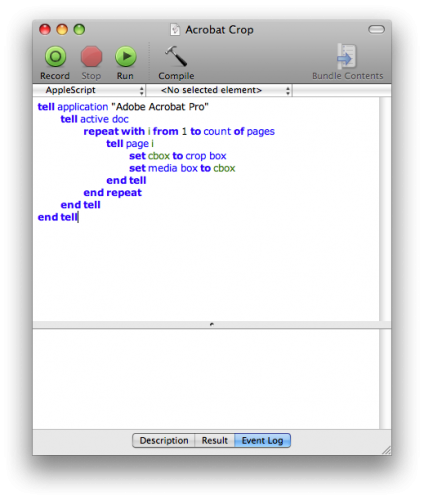 AppleScript isn't as intimidating as I thought it would be. At least it's not when the script is provided to you.

I hit the Run button, and a few seconds later it was done. Aaaaaaand Boom! Just like that. 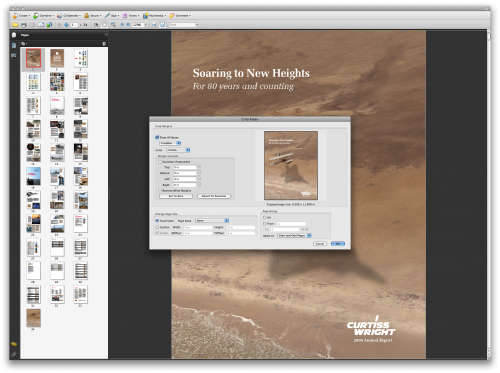 Once the script has been successfully run the Crop Pages dialog box is singing a different, happier tune.

It was so simple, that it’s ridiculous to me that Adobe could not include that function in Acrobat itself. Should they include just such a feature in Acrobat 10? Absolutely. Do I believe they will? Probably not. But a guy can dream.

Previous: Marketing for the homeless
Next: The power of touch