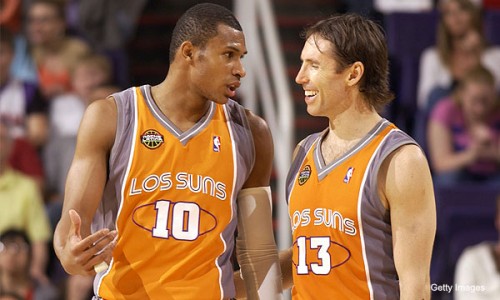 Last night I watched a gripping documentary by ESPN titled The 16th Man. It was the newest production from their 30 for 30 series and centered around the release of Nelson Mandela in and the role he and the South African rugby team, the Springboks, played in uniting the country during a time of civil unrest. The show closed with one of Mandela’s more well known quotes:

Sport has the power to change the world. It has the power to unite in a way that little else does. It speaks to youth in a language they understand. Sport can create hope where once there was only despair. It is more powerful than governments in breaking down racial barriers. It laughs in the face of all types of discrimination.

The airing of this episode is very poignant. Today on Cinco de Mayo the Phoenix Suns will be wearing their Los Suns uniforms in protest of the the law the State of Arizona passed, effectively setting civil rights back 50 years. As Suns President and GM Steve Kerr said, the Suns want to “make sure that people understand that we know what’s going on and we don’t agree with the law itself.”

The Suns get it.