One small step for Taiwan, one giant leap for mankind 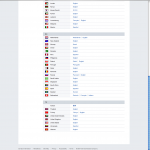 It’s not perfect, but on Thursday, November 2nd, GE did a good thing by altering their website.

Previously on the Worldwide page of GE.com users could find a list of all of the various countries and territories that GE does business in and has a website for. Each territory was accompanied by a link to each site in the languages that it had available for that site as well as it’s flag. With one exception, Taiwan. Now I admittedly have some bias on this issue because I have friends from Taiwan and I sympathize with their plight and the oppression their people have been unnecessarily forced to endure. I won’t speculate as to how it came about that every country got to have a flag besides Taiwan. But I will say that it is unfortunate that it came to be that way.

From my understanding, upon being notified of this issue, the Taiwanese Foreign Ministry contacted GE and began negotiating an agreeable resolution. In the end, the new GE.com Worldwide page no longer contains flags, for any country. It’s not necessarily the best solution, but GE does deserve some credit for doing the right thing and showing the people of Taiwan some respect after being put in a difficult position by another Asian nation.