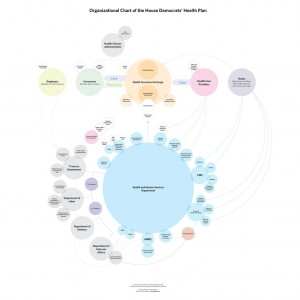 Graphic and information designers have circled the wagons after Republican Representative John Boehner of Ohio released his anti-design version of an Organizational Chart of the House Democratsâ€™ Health Plan with the obvious intent of confusion and fear. Perhaps the most offended by this act was Robert Palmer, who wrote an open letter to Rep. Boehner and was generous enough to redesign the chart as any responsible designer would, attempting to make the information as easy to comprehend as possible.

In his letter to Boehner titled “Do not f**k with graphic designers“, Palmer explains why Boehner’s chart is so offensive.

By releasing your chart, instead of meaningfully educating the public, you willfully obfuscated an already complicated proposal. There is no simple proposal to solve this problem. You instead chose to shout “12! 16! 37! 9! 24!” while we were trying to count something.

So, to try and do my duty both to the country and to information design (a profession and skill you have loudly shat upon), I have taken it upon myself to untangle your delightful chart.

And shat he did. This isn’t the first time Boehner has metaphorically crapped in his hands and hurled it at graphic designers like an insolent little chimp. His chart on Speaker Pelosi’s National Energy Tax was a visual and bureaucratic nightmare in and of itself, to borrow the Representative’s words.

If he hasn’t learned his lesson already, I doubt he ever will. I’m still hoping that Edward Tufte will go “Buzz Aldrin” on Rep. Boehner for insulting the graphic design profession.