The new Virgin America safety video has gotten a lot of praise, especially in comparison to the safety presentations of other airlines. But I’m still partial to the original, animated one.

Seeing as how today is National Porno-Scanner Opt-Out Day (don’t forget to request your pat-down if you’re traveling today) I’ve got a TSA ridiculousness double-feature.

Mythbusters Adam Savage reminds us that the failures of the TSA and the Porno-Scanners are not a recent revelation.

The hits just keep on coming. Now we’re hearing that the new TSA x-ray scanners may be even less effective than we’ve been lead to believe. And not just less effective, but essentially worthless. Fantastic.

Eliot Spitzer introduces us to “Operation Hemorrhage” and goes on to explain how the Porno-Scanners are just one more indication that the terrorists are winning and “mocking us.”

A month after Tom Sawyer was forced to board a flight humiliated and soaked in his own urine he finally received an apology from the TSA.

â€œThey need to know what it looks like, how it functions. They obviously do not know,â€ Sawyer told the newspaper, adding that he refused to fly again for the time being.

[TSA chief John] Pistole vowed to discuss the issue with TSA supervisors to determine what kind of training should be implemented.

So what Pistole is saying is that the agency gave little to no attention to the sensitivities of children, seniors and the disabled when planning the implementation of these policies? Nice.

As Mike Davidson said, “Itâ€™s official: itâ€™s not a real scandal unless NMA animates it.”

No x-ray, no pat-down, come on through

I asked The Supervisor, â€œPer my constitutional rights, I am not allowed to be detained without reasonable cause for arrest.Â Â Now, am I free to go?â€

He answered, â€œIf you leave, we will call the APA.â€

I said, â€œActually, thatâ€™s probably a good idea.Â Â Letâ€™s call them and your manager.â€

Why Cavity Bombs Would Make the TSA Irrelevant

Three experts I spoke to this weekend — two of whom are currently serving in government in counter-terrorism capacities — believe it is only a matter of time before the technique is tried here. “We have nothing in our arsenal that would detect these bombs,” one told me. “There is no taboo that we can see against this technique. Suicide is suicide, it doesn’t matter how gross it is.”

By attempting to protect one high-value target, the TSA is creating another.

The occasional voices of reason are what I enjoy most about this entire saga. A security official in Amsterdam has called for what other security experts have been begging for during the last decade.

“If you look at all the recent terrorist incidents, the bombs were detected because of human intelligence not because of screening … If even a fraction of what is spent on screening was invested in the intelligence services we would take a real step toward making air travel safer and more pleasant.”

I left this out of the TSA porno-scanner round-up because I thought it deserved it was more significant than the others. Much of the discussion has centered around the humiliation of passengers, the trampling of the rights of U.S. citizens, the poor planning, communication and response of the TSA and the resulting public outrage. But prior to today I hadn’t read anything about the TSA screeners, who are often receive the brunt of the outrage.

A small survey was conducted asking 20 TSA Transportation Security Officers (TSO) about their thoughts and experiences as they relate to these new tools and procedures. The responses are unanimous in their disapproval of the new procedures, their extreme level of discomfort in performing the pat-downs and the embarassment they’re subjected to at the hands of justifiably enraged passengers.

“Molester, pervert, disgusting, an embarrassment, creep. These are all words I have heard today at work describing me, said in my presence as I patted passengers down. These comments are painful and demoralizing, one day is bad enough, but I have to come back tomorrow, the next day and the day after that to keep hearing these comments. If something doesnâ€™t change in the next two weeks I donâ€™t know how much longer I can withstand this taunting. I go home and I cry. I am serving my country, I should not have to go home and cry after a day of honorably serving my country.”

Speaking from recent air travel experience, it’s hard to be respectful when a strange man’s hands are down your pants, against your will. But I doubt he wanted his hands their either.

It seems like almost daily there are new reports of horrific TSA experiences resulting from the new porno-scanners and enhanced pat-down techniques. Here are a few of the most recent.

â€œOne agent watched as the other used his flat hand to go slowly down my chest. I tried to warn him that he would hit the bag and break the seal on my bag, but he ignored me. Sure enough, the seal was broken and urine started dribbling down my shirt and my leg and into my pants.â€

The security officer finished the pat-down, tested the gloves for any trace of explosives and then, Sawyer said, â€œHe told me I could go. They never apologized. They never offered to help. They acted like they hadnâ€™t seen what happened. But I know they saw it because I had a wet mark.”

Pistole had pledged Sunday to review security procedures in the wake of a public outcry. But he also said the TSA must balance people’s demand for privacy with the need to protect passengers from those who would try to set off bombs on planes.

In other words, we’re not going to change anything. Here’s the interview with Pistole. Pistole may not have been a politician by trade, but he’s picked up the nuance of saying something while saying nothing very quickly.

Update: This should come as no surprise to anyone that’s traveled by commercial jet in the past few years.

The TSAâ€™s screener-training program suffers from systemic problems, including a shortage of on-the-job training monitors, slow or malfunctioning computers, and managers who fail to give TSOs enough time to keep up to date on their their legally-required training.

Photos of Afghanistan in the 1950s and 1960s are in stark contrast to the photos we’ve become used to seeing in modern times. 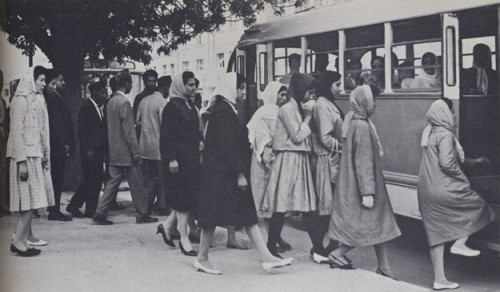 Taking city maps and overlaying them with the frequency of photo taken and posted to Flickr by local residents as compared to tourists.

The site Paris 26 Gigapixel is a project where 2, patient 346 individual photos were put together for a crazy high-resolution self-guided tour of the city of Paris.

As if suffering through anÂ magnitudeÂ 8.8 earthquake wasn’t scary enough, some cities in Chile and as far as Brazil appear to have actually moved. Permanently.

The magnitude 8.8 quake that struck Chile, moved the entire city of Concepcion 10 feet to the west… the countryâ€™s capital, Santiago, moved 11 inches west. Even Buenos Aires, nearly 800 miles from the epicenter, shifted an inch.

Mandrill is a new transactional email service from MailChimp. Sign up today.